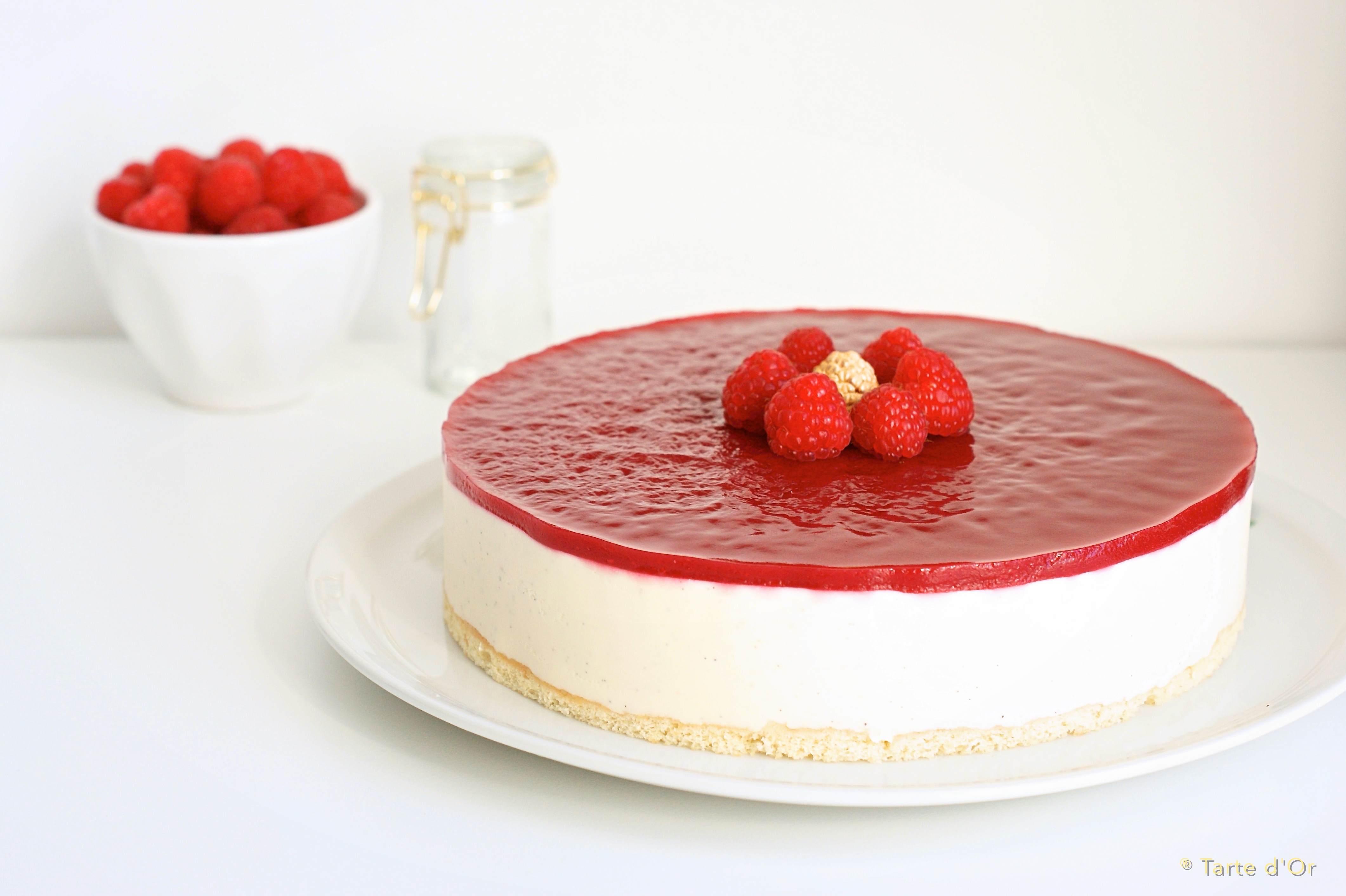 When someone brought me (huge) vanilla pods from Madagascar, my brain went crazy with all the possibilities I had. I already used vanilla pods before of course but the ones I find in the Dutch supermarkets are usually small, dry and do not contain that many seeds.

It became quickly obvious that I wanted to make something with raspberries because 1) I love raspberries and 2) it goes really well with vanilla. So here I am, looking on the Internet for some inspiration and I found this : a Bavarian cake with pistachio’s, vanilla and raspberries on Aurore’s Bakery blog. The recipe is in French but all you need is to look at the pictures :).

Pistachio’s and raspberries are also a very good combination so why not? Well… the problem is I couldn’t find pistachio’s powder here and I didn’t really have time (and motivation) to do it myself so I decided to use another biscuit recipe. I know, I could have replaced the pistachio’s powder by almond or chestnut powder that I already had at home but it was also a perfect opportunity to try a recipe from Christophe Felder’s book I recently bought called Patisserie. It looks more like a fluffy sponge cake base you could use for a tiramisu for example but I wanted to give it a try. It turned our pretty well in the end, especially when you want the vanilla to be the main flavor you taste. Ingredients (for a 22 cm cake)

Preheat the oven (180ºC). Put some baking paper on your baking tray.
Sift the flour. Whip the egg whites until firm peaks and slowly add the sugar. Keep whisking until shiny and stiff peaks (like meringue).
Add carefully the egg yolks and whisk few more seconds at low speed. It should like the previous step but a bit yellowish.
Stop whisking and add the flour, mix it carefully with a spatula until everything is incorporated. Spread the preparation evenly (about 1 cm high) on the baking paper.

Bake in the oven 10-15 min, depending on your oven (I used the convection mode and it took about 12 min to get a nice light brown color). Put it aside and let it cool down.

First, you have to prepare vanilla custard sauce (“creme anglaise”).

Cut the vanilla pod and remove as many seeds as possible with the knife. Warm the milk in a pan with the vanilla seeds and the pod. It does not have to boil, it just needs to be warm. In the meantime, whip the egg yolks with the sugar in a bowl until it gets white and foamy. Remove the vanilla pod from the milk and pour slowly the milk in the eggs/sugar preparation (keep whisking the preparation – if you have a kitchen robot, it is of course way easier). Then, pour everything back in the pan you used for the milk and cook it slowly until it gets thicker. Keep stirring all the time. This step is important because if you cook it too hot or if you don’t stir continuously, the eggs will coagulate. Let it cool down a bit.

Put the gelatin in a bowl of cold water for few minutes. Then remove it from the water, press it in your hands to remove as much water as possible and incorporate it to the vanilla custard with a whisk until it is all melted. leave it cool down.

The second phase is to add whipped cream to the vanilla custard sauce.

Put the bowl, the whisk and the cream few minutes in the freezer. Then, put the cream in the bowl and whip it at high speed until it looks like whipped cream. Be careful not to whip it for too long though, otherwise, it will turn into a creamy/butter consistence. Add carefully the whipped cream in several times to the vanilla custard sauce.

Put some acetate band inside the ring (this is optional for this cake, it just makes it easier to remove the ring). Cut the biscuit so that it fits in the baking ring you are using. Put the ring on your service plate, then put first the biscuit and then add the vanilla mousse. If needed, use a spatula to flatten the surface. Put it in the fridge to set for 2 hours minimum.

Put the gelatin in a bowl of cold water.

Cook the raspberries with the water and the icing sugar in a pan until it melts (it does not have to be too warm). Then mix it and filter it to remove all the grains. Press the gelatin in your hands to remove as much water as possible and add it to the raspberries. Pour this mix on top of the vanilla mousse (after the 2 hours in the fridge). it should spread evenly on its own.

Put the cake back in the fridge and let it set for 1 hour minimum (everything will actually taste better if you wait until the day after).

Remove the ring and the acetate band. Decorate if you want with some fresh raspberries.

I brushed one raspberry with gold edible powder and put other raspberries around it.