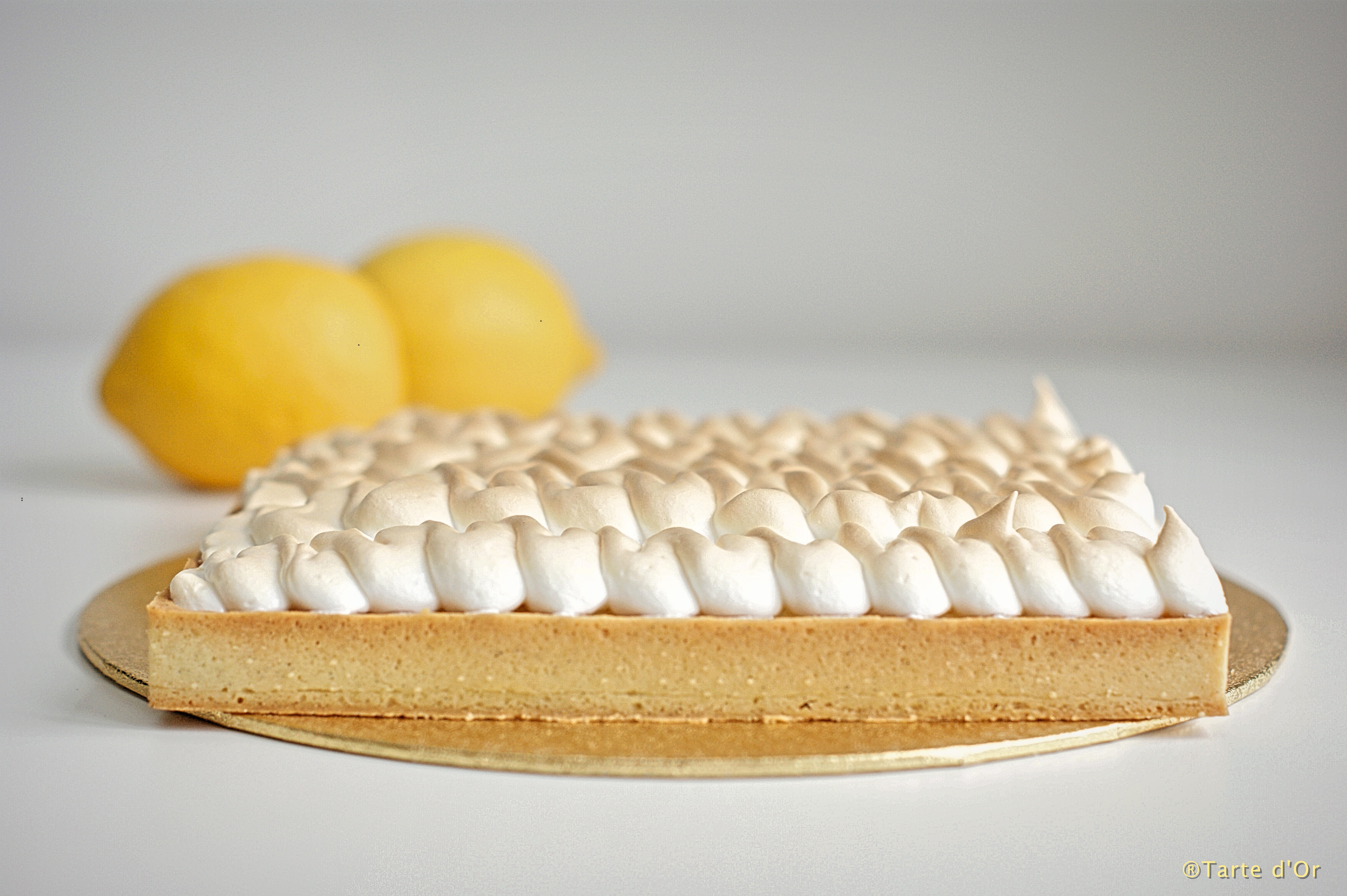 A classic from French patisserie : the lemon meringue pie ! I made this one for a Craft Night organised by the shop Cross and Woods in The Hague where I buy yarn (baking is not my only hobby, knitting is another one… so if I haven’t post recipes recently, now you know why). Yarn, cakes and even dogs were there, perfect evening for me !

I had baked a gluten free version of it few months ago but the dough was a bit crumbly so the presentation not good enough to make a nice picture of it.

For this version, I used the recipe of the book Patisserie! from Christophe Felder for the dough and the lemon cream and the recipe of Pierre Hermé for the italian meringue.

Start with the dough. Sift the icing sugar on top of the soft butter in a large bowl. Add the almond powder.

Cut the vanilla pod in half and remove as many seeds as possible with a knife. Add the seeds to the butter/sugar/almond mix with the pinch of salt. Mix with a wooden spatula. Add the egg and keep mixing.

Sift the flour on top of this preparation and mix it to obtain a smooth dough. Don’t mix it for too long.

Make a ball with the dough and wrap it in plastic foil. Place it in the fridge for about 2 hours (you can prepare it the day before). This step is important to harden the dough, otherwise it will be too soft to work with.

After 2 hours, take the dough out of the fridge and warm it up with your hands. Try to flatten it as much as possible.

Place the dough between 2 sheets of baking paper and flatten it with a roll until it is 4-5 mm thick. Then cut the dough with the baking ring of your choice or place it in a pie mould. I used a square ring from the brand Valrhona.

I rolled the excess of dough in a long rectangle and cut 4 pieces to cover the edges of the ring. Then I cut the dough that was over the edges with a knife.

Prepare then the lemon cream.

Put the sugar and the eggs in a pan.

Rasp the skin of the 2 lemons above it, then cut the lemons in half and squeeze them to obtain as much as juice as possible. Add the juice in the pan.

On the side, cut the soft butter in small pieces and put it in a large bowl.

Keep mixing this while cooking on medium heat. When it becomes thick, turn off the heat and pour the cream on the butter. Leave it like this for 2-3 min to allow the lemon cream to melt the butter. Then mix with a whisk until all the butter is incorporated. Pour this mix in a sift over another bowl to filter the cream. This will make it smoother and remove the pieces of lemon skin.

Pour the cream on top of the dough. Place it in the fridge while preparing the meringue.

For the meringue, put the sugar and the water in a pan. Warm it up on medium heat with a thermometer to control the temperature.

Put the egg whites in the bowl of your kitchen robot. When the syrup in the pan has reached 100˚C, you can start the robot at medium speed.

When the syrup reaches a temperature of 110-112˚C, put the robot on higher speed to be sure the egg whites are firm when you will add the syrup.

When the temperature is at 118°C, turn off the heat, lower a bit the speed of the robot and pour the syrup very slowly on the egg whites. Once everything is incorporated, put the robot on high speed again and keep mixing until the meringue is cold.

Put the meringue in a piping bag and decorate the lemon pie as you want. Put the pie under the grill of your oven for few minutes until the meringue is brown.

Keep the pie in the fridge until serving it.