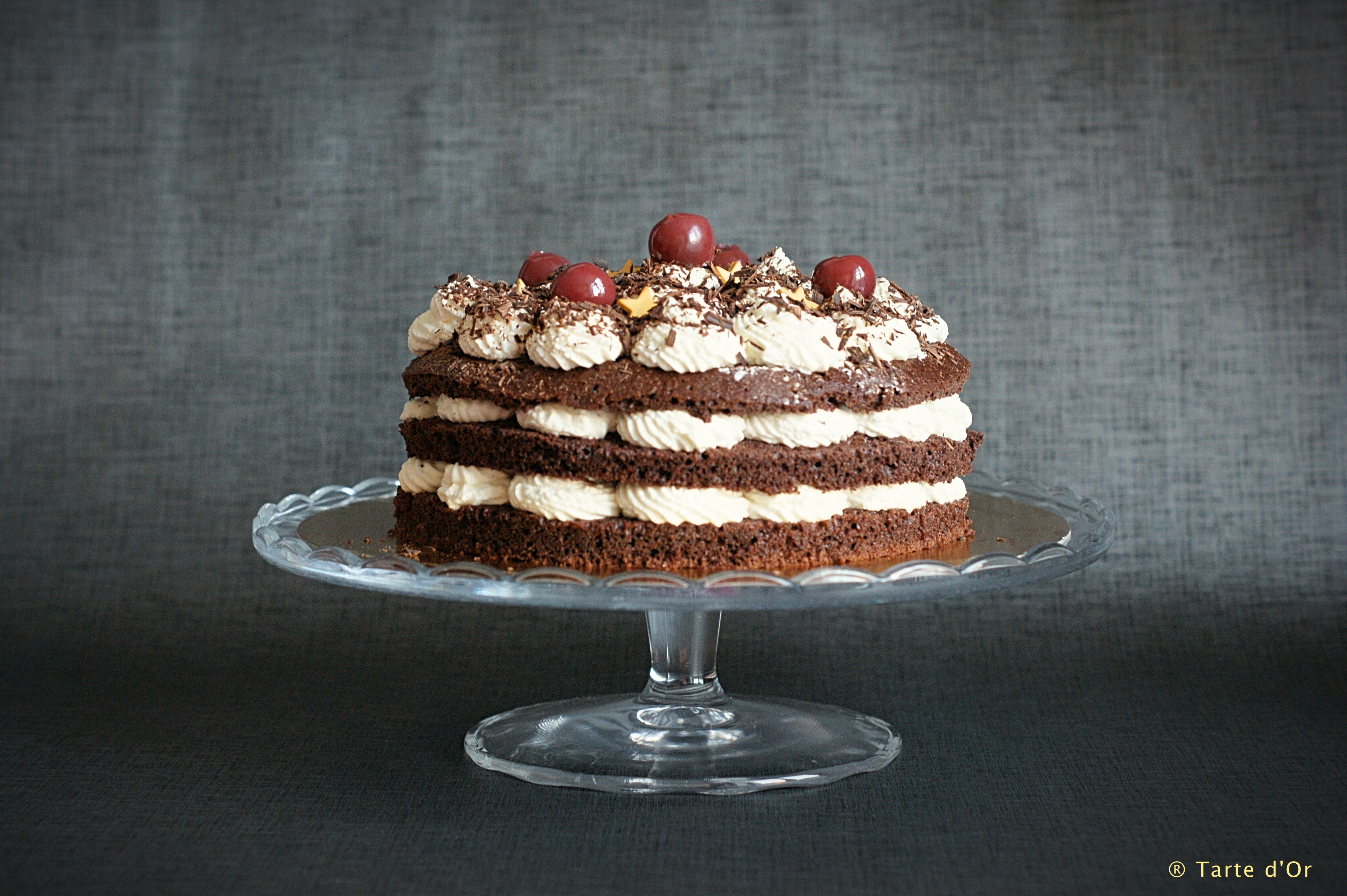 Usually not my favorite classic cake because the ones I had taste so far contained too much kirsch to cover the plain taste but this version with a mascarpone chantilly and just a bit of cherry liquor is really delicious!  I chose to make it look like a naked layer cake, not only for the look but also because I was afraid that the amount of mascarpone chantilly would make it too heavy and I think I was right, it was a very good balance between the cake and the cream.

Start with the chocolate sponge cake.

Separate the whites from the yolks. Whisk the yolks, the sugar and the vanilla aroma until it becomes white and foamy.

Sift the cacao powder and add the cinnamon. Add the lightly warmed milk and mix with a fork. Add this preparation to the previous one.

Sift the flower and the baking powder directly on top of the mix and mix gently with a spatula.

Whisk the egg whites with the salt until they get white and firm. Add them in several times with a hand whisk.

Grease the mould and pour the cake mix in it. Bake for approximatively 35 min. When you take it out of the oven, slide a knife between the edge of the mould and the cake to make it easier to remove when cooled down.

When the cake has cool down a bit, remove it from the mould and let it cool down completely on a rack.

In the meantime, prepare the filling. Place the mascarpone, the cream, the whisk and the bowl of your kitchen robot in the freezer. If the bowl does not fit (as it happened for me), place it in the fridge a bit longer. During this 15 min, prepare the other ingredients : cut the vanilla pod in the length and remove as many as you can with a knife. Weight the icing sugar. Mix the cherry juice with a bit of kirsch (I usually think it is too strong but you can add as much as you want. The kirsch is supposed to make the cherry taste a bit stronger not cover all the other flavours).

Then, pour the cream, the mascarpone in the bowl and start whisking. Once it start getting firm, decrease the speed of your kitchen robot and add the vanilla seeds and the icing sugar. Increase again the speed of your robot until it gets the consistence you want. Be careful not to over whip it, otherwise it will become butter.

Once it’s done, keep it in the fridge.

Cut the chocolate cake in 2 or 3 layers. The original recipe I used as a base said in 2 but I think 3 layers look better. My cake had also risen up more in the center than on the edges so I used a baking ring to cut a a cake of a smaller diameter and be able to cut 3 layers and remove the round top.

Soak the base layer with the juice/kirsch mix using a kitchen brush. Be generous !

Pour the chantilly cream in a piping bag if you want to make a nice decoration. Otherwise a spoon will be enough.

Finish with the last layer of cake and cream. Decorate it with nice cherries, pieces of chocolate and any other decoration you want.

Keep it in the fridge until you serve it.