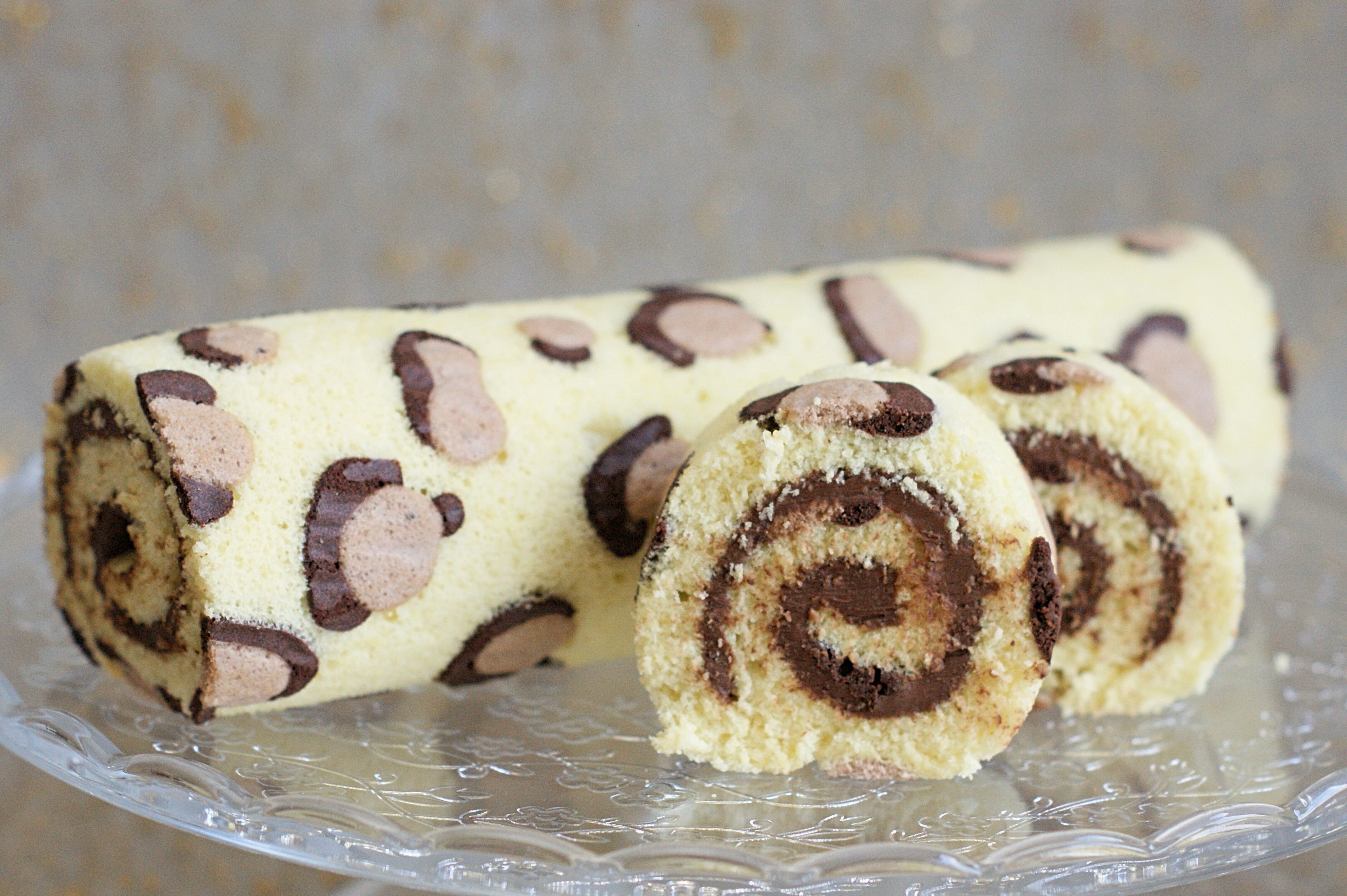 I know I’m new on the blogosphere but I have seen the leopard cakes, brioches and cookies for 2 or 3 years now and I finally decided to give it a try. I was not disappointed : it’s fun to bake, it’s delicious and it’s REALLY easy to make. It takes some time to do the dark sports but it’s so easy, I definitely think I’ll try a more elaborate pattern another time (thank you Pinterest 🙂 ).

I found the original recipe of the cake on a French blog called Perle en Sucre, I had already tried her Zebra Cake recipe for Halloween and it had been a success as well.

For the ganache, I did not had cream in my fridge but I had soy cream so it was a good occasion to try a vegan chocolate ganache. It’s really easy too, it gets thick much quicker than regular cream (it’s actually not necessary to put it in the fridge) and it’s pretty easy to work with. Definitely on my list for basics now. I found the recipe on this blog. For the ganache (the original recipe said 250 gr of soy cream and 280 gr of chocolate but I used about half of it only):

First prepare the ganache : put the cream in a small pan and warm it up until it began to boil (remove it from the heat as soon as tiny bubbles appear on the side or in the middle). In the meantime, cut the chocolate in small pieces and put it in a big bowl. Then pour the cream on top of the chocolate and let it seat few minutes.

Then mix it gently with a whisk or a spatula until everything is well-mixed. Put it in the fridge if you want it to get it ready faster or, as I wrote above, you can leave it at room temperature.

Now the cake: whisk the yolks with the sugar and the vanilla until it gets white and foamy.

Add the flour and mix with a wooden spoon or a spatula. It will get thick and difficult to mix but that’s normal.

In the bowl of your kitchen robot, whisk the egg whites with the pinch of salt until stiff. Add 3 big spoons of them in the first preparation to make it easier to work. Add the rest in several times and mix gently every time with a whisk (from the bottom to the top in circular movements to incorporate as much air as possible).

Preheat the oven at 180˚C. Put a sheet of baking paper on a tray. Make sure it is really flat on the tray.

Put these 2 mixes in a piping bag (I actually used small plastic sandwich bags and made a very small opening in one corner).

On the baking paper, begin with the light brown mix by make some spots from different shapes. On many blogs, I saw people placing a printed pattern under the baking tray but I don’t have a printer so I let my creativity do the job.

Bake it 2 min in the oven, take the tray out and do add the dark brown mix around the light brain spots to make it look like leopard pattern. it does not have to be perfect. You can even make few small dark spots between the others.

Then pour the rest of the preparation (the not brown one) on top of the spots and carefully make it even with a spatula.

Bake it 8 to 10 min depending on your oven. If needed, leave it few more minutes but it does not have to become brown though.

While it is cooking, make a kitchen towel wet with warm tap water and press it in your hands to remove the excess of water. When the cake is cooked, turn it upside down on the towel and roll it together. It will give the rolled shape to the cake, otherwise, it may break. Leave it aside to cool down a bit. If you had placed the ganache in the fridge, you can take it out now. It will be easier to spread it on the cake.

Unroll the cake with the towel, spread a nice layer of chocolate ganache and roll it back again (without the towel of course…). Don’t roll it to tight but not too lose either. For example, if you see space between the ganache and the cake, it is not tight enough.

If you serve it later, you can put it in the fridge but I would recommend to take it out at least 30 min before eating it.